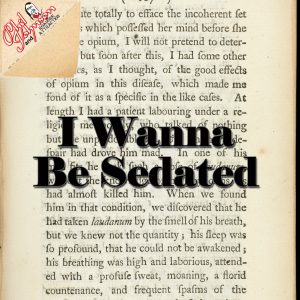 I woke up one morning in one of those mid-dream states and a bizarre version of the Ramones’ “I Wanna Be Sedated” was rolling around in my head as a leftover.

Basically everything the Ramones didn’t stand for.

But it sounded so ridiculous in my head that I had to record it. And I’m always looking for an excuse to work on my vocal harmonies anyway. 🙂

How I Arranged The Ramones “I Wanna Be Sedated”

I hadn’t listened to the song in ages, but it’s a pretty easy one.  Basic I-IV-V rock and roll.  Of course.  I started working out the arrangement with a couple chord substitutions here and there, and then I realized I couldn’t remember all the lyrics.

I thought I couldn’t remember them until I looked them up.  Turns out, not a ton of words in this one.  And it’s a very repetitive song.  So I had to pull out some arrangement tricks to keep things interesting for the whole 4 minute arrangement.

If you listen to the vocal harmonies, they start lower than the main melody in the beginning and then use higher voicings in the second half of the song.  I also added tiny instrumental elements to help build the energy towards the end.  A little shaker, a tiny bit of kick drum.

When it came to the iconic one-note guitar solo I needed to find a way of retaining the reference to the original but also create something more interesting to listen to at this slowed down tempo.  I ended up keeping the droning E string and building a sweet little melody below it.

After finishing the recording, I realized another interesting way of doing “I Wanna Be Sedated” would have been to reverse that whole process and have the song go lower in energy as it progressed instead of higher.

In the end I felt like that might have been interesting, but also somewhat unsatisfying to listen to.  That and my to-do list of other projects staring me down. 🙂  But it could be something that pops up later.

Ok, here we go.  Check out my cover of “I Wanna Be Sedated” in the Spotify player below or find it on your favorite streaming music site.