Vegas is an interesting bird for comedians.  You get audiences of all different types of people from all different places with all different points of view and bases of reference.  So it always makes for challenging shows.

I did four shows on this run.  The first in Vegas at the Rampart Casino and the other three just outside Vegas at the Primm Valley Casino.  I’ve played Vegas quite a few times, but this was my first time headlining in the area.

The first show at Rampart went how I expected.  It was a 7pm show at a casino in one of the wealthier neighborhoods in Vegas.  So the audience was rich, old, and white.  The addition of a high ceiling to the otherwise very nice showroom assured me that I wouldn’t be hearing a ton of laughs even when they were there.  And they were there plenty.  Lots of great compliments afterward.

On the way to that gig I’d seen a billboard saying that Gogol Bordello would be in town Fri/Sat for shows at a new venue on the Strip called Brooklyn Bowl.  I LOVE Gogol Bordello, but figured their show would be at the same time as mine, so no dice on seeing them.

Directly after the Rampart show, I hightailed it over to the LA Comedy Club at Bally’s to do a quick guest set. I’ve been trying to get booked there and nothing does the job like getting on a club’s stage to show what you can do for their audience.

And the set went great… Except the bookers weren’t there.  Oh, well.

Afterward I went strolling the Strip a bit and checked out The Linq, which is a mostly shops and restaurants leading up to the giant ferris wheel thing they have now.  I walked past Brooklyn Bowl and noticed that Gogol Bordello would be doing their shows at midnight.  Midnight!  I might be able to make it after all.  My own shows would be finished at 11:30.  Of course I was a 45 minute drive (plus parking) from the venue, so I still wasn’t sure.

And 8pm show on a Friday night.  The only thing better is 8 on a Saturday, which for some reason, this club doesn’t do.

We had a fantastic audience.  Just liquored up enough to be loose and happy. One of those audiences that laughs at punchlines AND setups.  It was contagious laughter.  There were two tables, one up front, one towards the back, that were super into it.  And their laughter got everyone else laughing harder than they would have.

Merch sales were great and I planned on celebrating with a cheeseburger later that night after the second show.

Instead, I ended up drowning my sorrows in a cheeseburger after this show.  We could tell we were in for trouble. People coming in were already slurring their speech and stumbling around.  They were well past “happy drunk” and headed for “tired and surly drunk:”.

The feature, Matt, went up and did the best he could with them.  We could both tell what was going on.  When a joke did land, they didn’t all laugh at the same time.  An overly drunk audience has a wobbly laugh that meanders across the room and never congeals into a full crowd reaction.  That’s when they laughed at all.

I got the same response.  Bouts of tired silence with scatterings of wobbly laughs.  Even the house manager said it was the drunkest audience he’d ever seen there.  I did my best to keep my energy up and give them the full show.  But they made me work for it.

One guy made farting noises during a punchline.  A few people stumbled drunkenly out during a song.  Someone else turned my video camera to the wall.  Probably just as well.  I didn’t need to see that video anyway.

The cheeseburger wasn’t even very good.  But at least it was on the house.

Strangely, no 8pm show on the Saturday.  That’s always the best show of the club week.  But we went straight for 10pm.  And the casino had a liquor tasting event earlier in the day.  So we figured we’d get more of the same.  Fortunately not so.  We got somewhere in between.  They weren’t the surly heckly crowd, but they also weren’t the happy go lucky folks either.  They were what we call a “tight” crowd.  They’ll laugh, but not for long, and not very loudly.

I would take an audience like that over the super drunk one any day.  But they made us work for every laugh for sure.

I thought it might be fun to show you just how much of a difference audience chemistry makes in a show.  The video below shows the same joke from the Fri 8pm and Sat 10pm shows.  The laughter in the second one is a full 10 seconds shorter than the first.  For exactly the same joke.  Check it out….

After the two shows on Friday, I was too exhausted to even try to hit up the Gogol Bordello concert.  But having only done one on Saturday, and not having a super hurried travel day on Sunday, I decided to go for it.

I packed up my gear and tossed it into my hotel room.  Jumped in the car and drove the 45 minutes into Las Vegas.  After attempting the Flamingo parking lot (which was full) and their valet service (hotel guests only), I took a shot on some street parking and, amazingly, got a spot.  Then walked about a quarter mile to the venue.

I had missed the first half hour of the show, but I was still able to catch a full hour.  Gogol Bordello doesn’t tour in the US much.  And they don’t have dates scheduled in my home area, so this was a rare chance to catch them.

And oh my… What a show.  If you’re not familiar, Gogol Bordello is an Eastern European motley collection of punk rock gypsies that are true world travelers and it shows in their music. They fit everywhere and nowhere.  An acquired taste for some people, but really a great band.

The show was totally dialed in.  The whole thing ran like a finely tuned machine, but not so much so that it seemed pat and staged.  Just enough looseness to keep you on the edge of your seat.

Thought I’d include a few pics of the show here.  Yes, I know, I don’t have any pics of my own shows. I was busy telling jokes and singing. 🙂 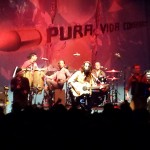 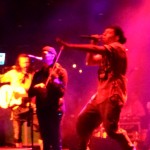 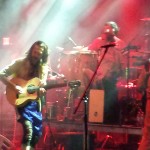 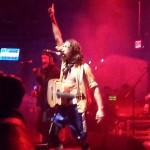 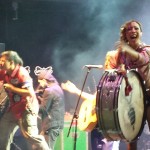 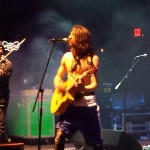