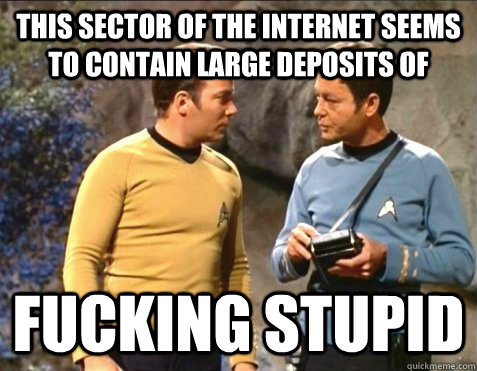 Ironically, this image is meta-stupid.

I usually spend a couple minutes each day cruising around the net to stay up on the zeitgeist.  Sometimes I find something really intriguing, creative, or useful.  More often I find things that are the equivalent of a song you hate and can’t get out of your head.

The thing is, headline writing has become such a science that they all pretty much sound the same.  So here’s my attempt at 10 headlines that pretty much cover everything on the internet.

1. Female Celebrity Does Something That Involves Her Being Partially Or Completely Nude

2. 5 Ways To Get Your Abs and Butt To Make You Look More Fuckable

3. 10 Things From Your Teenage Years You Didn’t Think Were A Big Deal Then But Will Make You All Weepy and Nostalgic Now

4. A Female Celebrity Did Something Normal On The Internet And She Might Or Might Not Be Naked

5. Professional Athlete Does A Thing In A Game That Ultimately Has No Bearing On The Human Race But You Have To Know Anyway

7. Something Happened On A TV Show And People Are Mad And It’s Funny That They’re Mad Because It’s Stupid But You’re Kind Of Mad Too

8. Oh My God! I Hope You’re Not Doing This Super Unhealthy (But Never Mentioned) Thing That Will Probably Be Totally OK Next Week When Another Study Is Released

9. Super Complex Scientific Discovery Is Dumbed Down For Average Human Consumption And Is Reported Before All The Facts Are In

Boom… That’s it.  The whole internet.  You may turn your device off now.