Disney dorks are legion. At the theme parks they often blend in the with the rest of the Mickey-clad crowd.  Until you spend some time talking to them in a line and discover that they go to the park 20 times per year.

If you’re friends with a Disney dork, chances are you know it already.  But if you’re oblivious, these red flags (which, of course, have two black buttons and black mouse ears) will let you know for sure.

I guess it would be uncouth for them to serve duck in the park.

1. Often has a yearning to suck meat off a giant turkey leg.
Your pal may be a dainty eater most of the time.  But when faced with a giant Disney turkey leg will immediately turn into a carnivorous cave person. When I think of the layers of turkey grease left all over those attractions…. 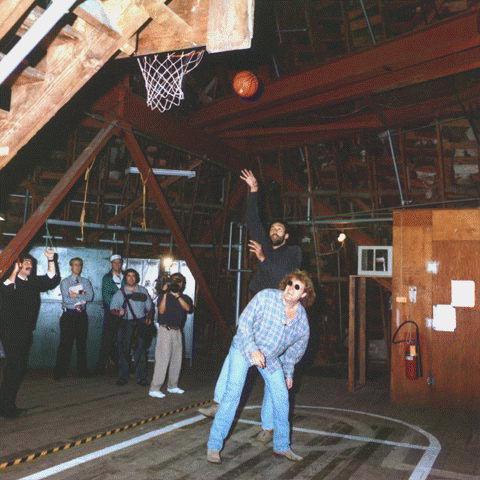 These people waited forever at the D23 Expo to see some props from “Once”.

3. Will arrive 4 hours early to wait in line for… just about anything.
Is it a 1980’s era Soviet bread line?  Maybe new product day at the Apple store?  Nope.  Disney dorks are Zen masters at waiting in line.  Not only for attractions at the parks, but for any Disney event, panel, presentation, workshop, or shopping opportunity. Nobody seems to think, “Hey, if we all decide to show up 30 minutes before the event, we can all wait in line less.”  Conversely, Disney dorks are also great at know how to not wait more than 20 minutes for any ride in the park. Fast Passes, single rider lines, the much abused GAC cards, touring plan software, and just good ‘ol timing. 4. Knows who all the people on the windows on Main Street are.
You may not have even noticed all the names on the Main Street windows.  But those are real people.  Animators, Imagineers, and other folks who put a lifetime of work into alternately blowing your mind with creativity and figuring out how to empty your pockets.  The ultimate in misdirection!

Sorry, your big idea for “Crack HouseLand” probably won’t make it through development.

5. Designs an entirely new “land”, posts it on a message board, and fantasizes about an Imagineer finding it and building it.
Disney message boards are constantly filled with armchair Imagineers dreaming up new attractions, new lands, and entire new parks.  Every single one of them dreams of an Imagineer silently watching the boards who will pluck them out of obscurity to make their vision a reality. Despite the fact that Disney has explained to them what a legal nightmare that would be. Next to the corndog cart is another cart that will give you a 2nd mortgage on your home so you can afford the corndog.

6. Will happily debate which Disney park corndog is superior.
I’ll admit… I’m both a great lover of Disney stuff and a great lover of corndogs.  But some people seriously go overboard and will seriously discuss this stuff. They’re all the same corndogs, friends.  All the same.  It’s a good thing the Dole Whip is only sold in one location. 7. Talks about “Walt” as if he were a close friend.
“That was Walt’s favorite” and “Walt wouldn’t have done it that way,” might make you think they knew Uncle Walt personally.  Not a chance.  The names “Tony”, “Rolly”, “Roy”, and “Ollie” are also casually tossed around.  Disney Dorks are really all just creepy stalkers.  By the way, both of those phrases exited my mouth in the last week. Seriously… Who watches Pocahontas more than once?

8. Has a DVD collection that would make you assume a child lives in the house.
“Oh, do you have kids?” one might ask upon seeing the brightly colored collection of DVDs on display.  But no, these are just people who have either retained the youth and exuberance of childhood or are living in some sort of stunted growth cycle. Depending on your point of view.

This appeared at the bottom of my bowl of grapes. Granted, I was eating in a Disney restaurant. So I’m sure it was on purpose.

9. Is constantly on the lookout for Hidden Mickeys.
Seriously, they’re everywhere.  It’s like the Imagineers are imagineering everything I look at.  Like they’re following me.  Stop following me, Imagineers!

It’s a migraine after all…

10. Actually enjoys the song, “It’s a Small World After All”.
I am a Disney dork.  And I enjoy the company of other Disney dorks.  However, those that actually enjoy this song and foist it upon others by happily singing it (and getting it stuck in everyone else’s head) need to be pummeled.