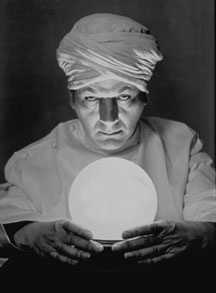 Well, since we’re just getting into 2013, I figure it’s about time we start talking about year 3000.  So here’s a few of my predictions for where the world will be 987 years from now.

1. Windows will continue to degrade until every computer that comes with Windows 337 aka Windows “O” (see below) will also come with the eligibility of a downgrade to the now 1099 year old Windows XP.

2. The letter “O” will take the place of “X” as the preferred hip and edgy letter to adorn juice boxes and skateboarding events.  Mountain Dew’s “Show Us Your O Face” contest just won’t be as funny as you expect.  Oprah still won’t change the name of her magazine.

3. Sex and violence in movies and TV will become so commonplace that there will be graphic scenes of monsters violating animal carcasses in Shrek 92: Donkey’s Hunt For Ass.

4. In the the years 3000 science fiction will be deemed redundant. And movies about the future will be considered obsolete. Bruce Willis will retire. – from Kurt Weitzmann – www.KurtWeitzmann.com

5. The human attention span will grow so short that the cinematic trope of brainwashing by forced watching of multiple video monitors will become known as a relaxing evening at home.

6. Google will broker a buyout deal with God to own the entire Earth.  You know it’s coming.

8. The world will have dealt with exactly 467 more “end of the world” prophecies put forward by religious nuts and conspiracy theorists.  Threats will range from alien attack to a return of the Egyptian god Anubis, who forces every person to watch a never ending loop of “Taxi” reruns.  Because Anubis really like Latka.

9. The Amish will take great leaps into technology and the future by purchasing their first Model T Fords.

10. The Bible will be translated into language more readable to modern people.  In the ‘Sermon at the Starbucks’ Jesus will say “F’n sweet are the meek.  For they shall inherit the Earth when Google dies.”  And the disciples will respond “LMAO”.

11.  Due to inter-racial mixing, ethnicities will become a thing of the past and everyone will look like “that guy”.

12.  In the 3000 Summer Olympics, a Kenyan runner will clear the finish line before the smoke from the starting gun has exited the barrel.

13. Researchers will look back at this blog post and think it quaint for predicting things that actually happened by 2085.