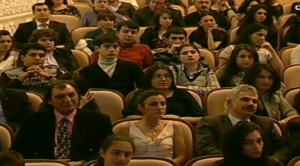 This would have been a major step up from the scared, drunk, confused audience Jack Drimmer of Auburn Racquet and Fitness Club left me with.

Geez, do I hate dealing with the drama of people who don’t understand things.  So I’m going to respond fully to this here and be done with it.

I recently did a corporate gig for Jack Drimmer and his company the Auburn Racquet and Fitness Club.

Jack’s review of my performance does not take into account that he lied to his guests, threw me under the bus, and made it nearly impossible for me to put on a good show.

When I booked this show with Jack Drimmer of the Auburn Racquet and Fitness Club and we spoke on the phone about what we needed, he said:

“Interactive” means they want crowd work.  All the “what’s your name, where ya from?” kind of improvised comedy.

I said, “Good. Let’s do that because I don’t do a lot of crowd work.”  I brought in Myles Weber who loves doing crowd work and the show would have a lot of variety that way. Prepared material and music from me.  Crowd work and material from Myles.

We get to the gig and everyone is taking advantage of the open bar.  So they’re overly lubricated by the time the show starts.  Par for the course.  We’re used to that.  Though one guy was passed out at the front table just as I got on stage.  Others around him were jamming straws in his mouth.  You can imagine that was a little distracting.

Just before the show I checked in with Jack one more time on what kind of content he wanted.  PG16 he says.  I said, “Are sex jokes ok?”  And he said, “Yeah, that should be fine.”  I could have done the show without them, but I remembered our earlier conversation where he said the show doesn’t have to be that clean.

BUT, two minutes before I go on stage…and this was never discussed before this… Jack tells me “Everyone kept asking me what the entertainment this year would be.  I told them that you’re a roastmaster and they each have to get up and tell a funny 5-minute story about our members.”

I asked, “Are we actually doing that?”

Jack says, “Oh no. I just wanted to mess with them.  Just go into your act and pretend like you’re going to do it, then never do it.”

Now, I’m all for trying to appease a client if they have a request, but this is a recipe for disaster at a comedy show.  Let’s look at why:

So I step backstage to tell Myles what’s happening.  He says, “Dude, you’re screwed,” because he knows how difficult my next 40 minutes are going to be.

Jack gets on stage to introduce me to his Auburn Racquet and Fitness Club employees as a “professional roastmaster” (which I’m not) and reminds them that they’ll all have to get on stage to tell a funny story (which they don’t sound the least bit excited about) and then brings me up.

Not to mention the audience was talking over him, wasn’t quieted, and was still talking when I got on stage and I had to quiet them before I could even start.

Before I’m a minute in people are walking off.  Why?  Because they don’t want to get on stage and talk. And they don’t understand what the guy on stage is doing right now.

Now those people who have wandered off are back at the bar talking very loudly (including Jack), making my job even harder because now I have to talk over the loud chatter at the bar, convince the remaining audience that I’m not actually going to pull them on stage, and reset their heads for a standup show.

Let me reiterate this… Lying to your guests about what the show will be and surprising them with standup DOES NOT WORK.

So I’m trying to tell jokes over the noise and play to the scattered but pretty attentive audience left in front of me.  As they started to figure out what was going on they enjoyed my material.

No doubt I could have had a better set.  And I’ll be the first to admit that.  But given the circumstances, I was muddling through the best I could and giving them whatever laughs I found possible.

As for his claim that I was too dirty, he told me sex jokes were ok.  And mine certainly aren’t graphic.  In fact you can see the exact material I did here, here, and here.  Not even a single swear word. And that was a total of about 8 minutes of my 40 minute show.  The rest was absolutely clean material.

I did about 40 minutes on stage.  The people that were paying attention enjoyed it a lot and told me so afterward.  Jack wouldn’t know if I was funny or not because he was back at the bar drinking and talking loud like the rest of the disrespectful drunks.

I brought Myles up and he jumped right into crowd work.  Even then it took him a good 5-7 minutes to get them on board.  And that was after I’d already helped them figure out that this was a standup show and not some weird roast their boss had lied to them about.

And they enjoyed the crowd work.  Great.  I told Jack ahead of time that I don’t do crowd work.  My demo videos don’t show crowd work.  Once we had Myles on board it didn’t sound like he needed crowd work from me.

When the show ended Jack shook my hand and said thank you.  He did not address any of his concerns.  I walked out of the venue with him at the end of the night discussing the week of traveling we’d each just done.  I said, “I hope everyone had a good time.”  He said, “Yes, I think they did.”  I wasn’t about to bring up problems if he thought it went ok.

I then reminded him that I needed a check for the rest of the performance fee from him as stated in our contract.  He claimed he’d already paid it through GigMasters two weeks prior (which he hadn’t).  I said I’d double check that and he said he’d send payment during the week if it wasn’t there.  Fortunately he did pay me two days later.  But still two days later than stated in our contract.

A professional adult would have discussed these concerns with me after the event instead of just thanking me and telling me everyone had a good time.  I could have explained to him that lying to his guests probably wasn’t a good idea and that I would have told him so had he discussed it with me beforehand.

Instead he blasted me with a terrible review on GigMasters.  And now you know what really happened.  Jack Drimmer of the Auburn Racquet and Fitness Club lied to his employees, threw me under the bus, and then blamed me for the show not going well.

How about a recap?

– Material was too dirty? – I checked twice to make sure of what I could do and stayed within those parameters.
– Phil wasn’t funny? – No comedian is funny when faced with a scared and confused audience.  Phil also tours the country as a professional comic and probably wouldn’t be allowed to if he weren’t funny.
– Half of the guests left? – Yes, because their boss told them they were going to have to get on stage and tell a story.

But I learned that I have to educate each of my private gig clients about how to put on a show correctly.  So water under the bridge and now I know better.

And if you’re a client of Auburn Racquet and Fitness Club, now you know what kind of person is running your gym.