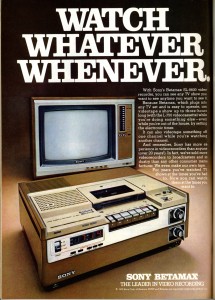 Sometimes when I’m writing jokes I start to have actual thoughts that don’t include punch lines.  Problematic when you’re trying to write comedy.  Today is one of those days.

A lot of the new material I’ve been working on for my next special is about technology, futurism, science… You know, stuff that will do great at bar shows with super drunk audiences.

As I was playing with some of the material today, this little cycle occurred to me:

A new technology needs a market or it dies on the vine.  No company will sink money into tech that can’t be sold. However, the eventual marketing of the tech might actually be stunting the growth of further tech.  Or maybe we consider it a checks and balances thing.

And yes, the irony of you wasting your time reading this post has occurred to me. Maybe you should be getting some work done. 🙂

To me it seems like advertising is the weak link in the chain.  The big thing now is “content marketing”.  That just means instead of a banner ad we’ll stick the name of the company in the article and tell you how we’re using it.

It’s a step in the right direction because it’s less advertise-y and actually more effective at selling.  But it still ends up creating content that you probably don’t need to be reading because it’s there more as a service to the product than to the reader.

Maybe we’re headed towards a way to actually decouple advertising from media, but we’ll probably have sentient robots enslaving us before we get there.

And that’s where my brain gives out today.  Don’t worry, I’m playing with these thoughts in my head and will be creating jokes out of all of it.  And maybe….