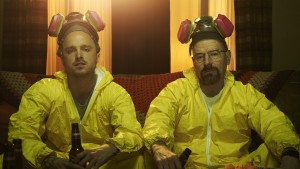 Have you seen the new Mickey Mouse Club? It’s a waaay different show than it used to be.

For the most part, I’ve taken to watching TV shows after they finish their run. Then there’s no waiting for a new season and losing sleep over a cliffhanger.  Mostly because I find it exceedingly dumb to lose sleep over a TV show.

Right now I’m in the midst of both Lost and The Office.  The only problem with watching TV this way is that when something incredible happens, you have no one to tell.  “Holy crap! Pam and Jim kissed!”  And your friends are like, “Yeah… years ago.”

You can’t just tweet about an episode that was on 3 years ago and expect anyone to care. But I know I’m not the only one doing this.  There’s a need for something here that aligns “late watchers” with one another to discuss and bond over shows that everyone else saw a long time ago.

I don’t know how to do it either.  Get on that techie people.

But I am watching Breaking Bad in real time.  Didn’t start out that way.  I started watching late and got caught up.  And they pulled that split-season stuff, so now I’m DVR’ing every Sunday evening and catching up Monday morning.  Which means I have to stay away from any real time feeds online after 6pm on Sundays.

And at the end of it all will be the separation anxiety of a show ending.  That slightly empty feeling you get when the characters you’ve been living with for years are all gone, whether or not they died on the show.  Sometimes it’s easier if they die because at least they died and aren’t just hanging around in some TV waiting room waiting for their next scene that’s never coming.

What I’m saying is someone should have bombed the Fresh Prince of Bel Aire mansion to give the show a solid ending.

Then you have to spend time getting into a new show, knowing those characters will never take the place of the Sopranos.  But eventually you get locked in to something new and find yourself once again spending way too many hours on the couch instead of writing new material for your standup show… Oops… too much info there.