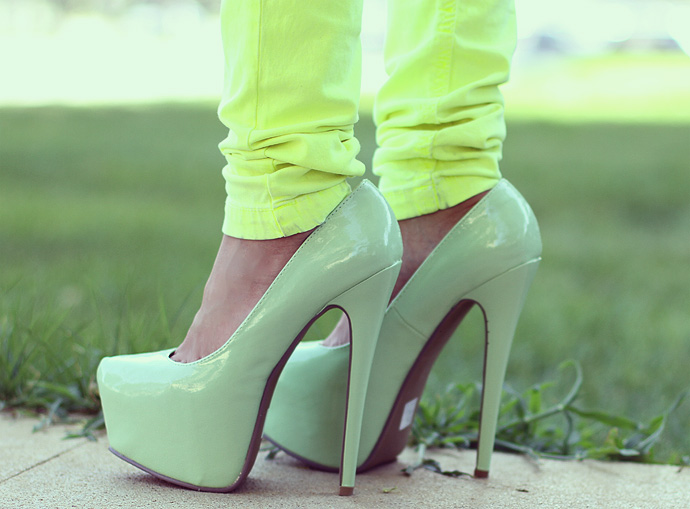 I’ve never understood why women wear high heels.  Oh I know the reasons they say they wear high heels.  We get it.  Heels make your butt and boobs stick out more.  That’s a fantastic reason to bind your feet like some sort of corporate geisha and turn your spine into a silly straw.

Let me tell you a secret ladies…. This is top secret man stuff now, so keep it quiet…. Ready?….

We’ll still look at your butt and boobs even if you’re not wearing heels.  Shocking, I know!  But we know where they are and we’ll still take a peek even if they’re not 6 inches higher off the ground.  So don’t you worry about that.

Besides, watching you teeter around the club looking like a drunken newborn giraffe with head trauma doesn’t necessarily scream “ideal mate”.  It does however scream “2am wounded gazelle”.

It’s really a competition thing between women.  Somewhere in the primordial brain of a woman lies a thought that says “If I’m taller, I’ll get the better men”.

There was a study printed in the journal Evolution and Human Behavior in which people rated the attractiveness of women with or without heels.  High heel shoes of course.  A woman without actual heels would probably have to try a little harder.

Anyway, they did it with a point light display in which lighted markers are place in key parts of the body and the viewers only see the patterns of light as the woman walks.  Kind of like a moving, but only partially finished Lite-Brite picture.

And while many men did rate the high heeled women more attractive, more women rated them as attractive.

Now of course, if this were a different experiment where viewers were rating the attractiveness of men, the women would have their answers and the male viewers would all say, “Hell no, he’s not attractive!  You callin’ me gay or somethin’!  I oughta beat your ass!”

What I’m saying though, is that this high heel thing is all between you ladies.  We don’t really care.  But we somehow get blamed though.  “Men expect it!  We have to get all dolled up to be paid any attention!”

Women seem to think men will do anything to get laid.  But you know what we won’t do?  Where uncomfortable shoes.  Oh sure, men will lie, cheat, steal, kill… But we will not suffer foot discomfort.

Going in to spend a bunch of money on uncomfortable shoes is like a guy going into a car dealership, and this happening….

“Hey, you like that BMW Z3, huh. Yeah, it’s a total chick magnet.  Oh that? Yeah, just a spike in the middle of the driver’s seat.  Don’t worry about that.  Slides right up your butt with a little lube.  I’ll tell you this though, the ladies love a man with a hot car and a spike up his ass.  They say it makes you sexier.  You might walk a little funny.  But if you put a band aid on your taint it keeps it from rubbing.”

So ladies, save your money, save your spine… We’ll still love you.  Unless you’re looking for one of those shoe fetish guys.  Then knock yourself out.