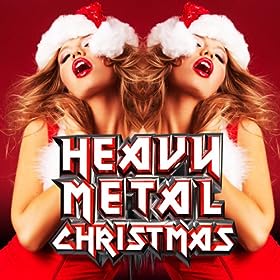 Some metal bands attack a Christmas songs with a healthy sense of how ridiculous the whole idea is.  Or they’re versatile enough musicians to really pull off a cool version of a Christmas song without seeming like a parody of Spinal Tap. Yes, I know Spinal Tap is a parody itself.

But I already covered those songs in my previous post: Top 10 Heavy Metal Christmas Songs.

Today is about the mistletoe missteps.  The overly earnest and the financially desperate.  These are the most embarrassing heavy metal Christmas songs…

Record Label Suit: Hey Dokken guys, you should record a Christmas song so we have something to sell over the holidays.

Record Label Suit: Well, you better or we’re not going to promote your next album.

And what follows is a template for the throwaway Christmas single.  A mind numbingly repetitive stock metal guitar riff that was ripped off and/or cast off from another song, weedly weedly guitar solo, clean guitar breakdown, followed by more weedly weedly.

I’m quite sure all the members of Dokken were intently watching TV while tracking their parts for this song.

When you have a band that’s pretty much a cartoon anyway, it’s really tough to try and do something overly earnest.  Especially when it’s that tired “been on the road rockin’ faces for months and I really want to go home” trope.

With video footage of the band miming playing the song on their tour bus, this could be the holiday version of Bon Jovi’s “Dead Or Alive” or Bob Seger’s “Turn The Page”.

Lita Ford shows up for a guest spot in a very festive red PVC jumpsuit and returns home to her loving (and uncomfortable looking) family, including the husband she recently divorced.  Happy holidays!

At the end they try and save it with and old folks home joke.  But it’s too late, Sister.  It’s too late.

I know everyone is raving about this steaming pile of holiday joy, but really, it’s super bad.  Yes, it’s fantastic that Mr. Lee at 91 years old decided to try his hand at some metal.  But maybe they should have done more than one take so he could sing it without falling behind the beat quite so much.

It sounds like they brought him in, had him sing the tracks, and then put cliche metal riffs behind his vocals after he left.  “Ah, hell.. He’s 91! He doesn’t even know how iTunes works!  He’ll probably never even know what happened!”

Rather than holiday cheer, maybe we should consider this elder abuse.

As promised, Alice appears on both lists.  I do love Alice and his cartoonishly villainous nature, but when you literally have to spell out the joke to make it fly, maybe it’s a bad idea. Besides, Tim Burton did it better years ago.

Rob Halford is a gay gentleman.  He’s singing a song about the Christian religion.  A religion that isn’t terribly fond of gay gentlemen.  Seems a bit like Hitler singing Hava Nagila, no?

Figured I’d put these two together.  They’re both great singers, no doubt.  But neither are known their subtle vocalizations.  They sing these songs like a 4-year old boy ransacks his presents on Christmas morning.  Screaming at the top of his lungs the whole time.

When Dio sing “tidings of comfort and joy”, I honest feel neither of those things.  Slightly scared, maybe.  However he sounds right at home on the line “to save us all from Satan’s power!”

Meanwhile Geoff Tate runs through White Christmas with all the nuance and subtlety of an improvised explosive device.

Featuring a cast of extremely talented musicians backing the way less talented Steve Kudlow of Anvil, this version of Frosty is just begging for some lyric changes make fun of the whole thing.  Look, if the YouTube comments beneath the video are actually more creative than the video, danger Will Robinson.

“But Bon Jovi isn’t metal!”, I hear you saying.  Yes, but this needs to be said, so I’m saying it here.  I might start praying to a God if musical abortions like this would case to exist.  Maybe. Pop rock bands with no experience playing the blues is bad enough.  Adding super cheesy 80’s synth to that arrangement should bring penalty of death.

For the love of Santa, please listen to Clarence Carter’s version of this song to hear what it’s actually supposed to sound like.

Kudos to Maiden for attempting an original Christmas song.  Shame on Maiden for calling it something as hokey as “Another Rock and Roll Christmas”.  With the stunningly obvious lyric “It’s another rock and roll Christmas.  It’s Christmas rock and roll.”  Just in case you were curious why you weren’t hearing Afro-Cuban music coming out of your speakers.

And I have to assume that nobody wants to hear Iron Maiden play a major key song that sound like a reject from Rock of Ages.  Maybe it’s just me…

WTF?  No, an acronym isn’t good enough for this.  WHAT THE FUCK IS HAPPENING HERE?  The Prince of Darkness cavorting around with Satan’s talentless hillbilly spawn with nary a guitar in site?  This video should end with Ozzy waking up from a bad dream, tv style, and poking Sharon with his 10 foot pole to exclaim, “I had the weirdest dream that I’d lost the last shred of musical credibility I had left!”

And it’s not at all creepy that Ozzy, dressed as a blind homeless man is singing this romantic song with Jessica, when suddenly Sharon arrives like a stalker third wheel to remind us all that she needs some attention too.

I’ll give him credit for the snowman dick joke though.

I’m not usually one to shit on an indie band trying to make their way in the world.  But this band’s YouTube channel is nothing but covers, so whatever.. If you’re in the mood for some super low budget green screen effects and a singer that sounds like she has a head cold… Dig in.

I posted these songs on the previous post about the best heavy metal Christmas songs too.  But I imagine many people consider them some of the worst as well.  So here ya go. 🙂