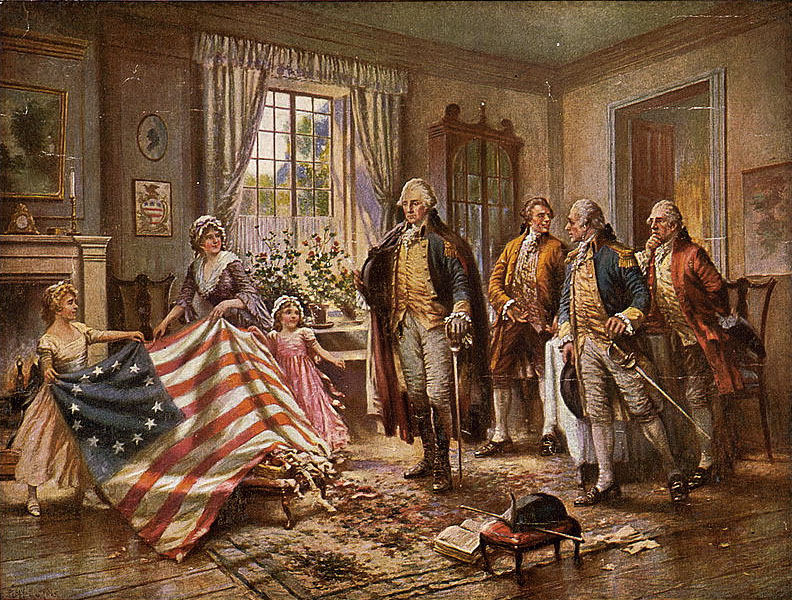 Hey Betsy, you wanna get that flag off the floor? Thanks. It's kind of against the rules.

The 4th of July is coming up next week. That wonderful day off full of hot dogs, beer, fireworks, sunburns, squabbles over how done the steaks should be, and people trying to remember the words to the The Star Spangled Banner.

In 1776, Thomas Jefferson stated, “The Second Day of July 1776, will be the most memorable Epocha, in the History of America. I am apt to believe that it will be celebrated, by succeeding Generations, as the great anniversary Festival.” There was more, but he was one of the long-winded 19th century types. So I’ll spare you.

But wait… “The Second Day”? Yes, friends, the Declaration of Independence was adopted on July 7th.  Jefferson had written a dozen versions of it before presenting it to the delegates. But you know how politicians are.  They have to tweak everything a little more just so they look like they had a hand in it. So they tweaked, and the official version was released on July 4th.  I don’t know if having that nugget of info is enough to convince your boss to let you take the 2nd and 4th off work, but hey, give it a shot.

It was signed on the 4th though.  They didn’t start signing the thing until August 2nd.  Politicians… They feel like they accomplished one little thing, then nothing happens for a month.  Unlike the famous painting of a bunch of powdered wigs standing together in a room signing the Declaration, it was actually signed piecemeal over the course of a few months.  They had to send the paper around to each of the guys to sign. You think things move slow in the government now? They didn’t even get it all finished until Thomas McKean signed in January 1977.  Fax machines people, really.

The names of the signers were withheld from the public for six months after that.  Just in case the whole “independence” thing didn’t work out.  They would have been open to treason charges.  I guess Patrick Henry was alone on that whole “Give me liberty or give me death,” thing.

The 4th of July wasn’t made an official legal holiday on 1941.  It was celebrated unofficially before that, of course.  But the timing makes me think it pissed off the Japanese a little bit.  As in, “Let’s see how independent they feel when we take out their whole battleship fleet”.

Just after the Revolution, the US economy tanked hard.  The basis of the American Revolution was “taxation without representation.”  And taxes and economics came right back to bite them in the ass. 40% of the war was financed with “continentals” the first version of the dollar.  They claimed it was pegged one-to-one with gold, but nope.  When they were retired in 1781, they were worth barely a penny apiece.  Another 18% of funding came from state debt issues and when those had to be retired, taxes when up five-fold compared to pre-war.  So just in case you thought the US was, at some point in the past, good with money… Nope.  We started off in the red. Deficit spending is the American Way apparently.

Nearly a year after the Declaration, they got around to the flag.  Legend says Betsy Ross sewed the first one. But according to a prominent biography of Betsy Ross there were several flag makers in Philadelphia and Betsy’s main contribution was changing the stars from six points to five.  Just easier to sew frankly.  But she gets all the glory.  And those other women are piiiiiiiiiissed!

The current flag was designed in 1958 by 17 year old Robert Heft.  They had a national competition to find the new design. When Robert submitted it to his teacher, he got a B-.  Then it won the competition and the teacher changed it to an A. “Oops” is right, teacher.  Really though… How hard could it have been?  All they did is move some stars around?  Were there entries that just couldn’t line them up right? The math doesn’t seem that hard really.  I’d love to see the losing flags.

So there ya go… We’ve been a little messed up since the beginning.  Enjoy your fireworks!