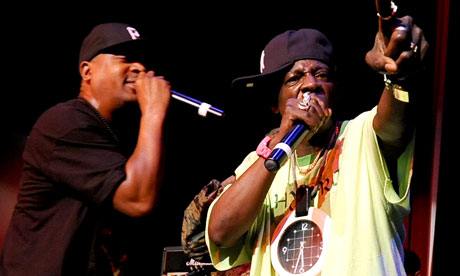 I grew up in the early days of rap music and have been a fan since the beginning.  I suppose it’s thanks to MTv (back when they played music) that I was exposed to RunDMC, Grandmaster Flash, and the Beastie Boys so early.  I’ll put it this way. I discovered Aerosmith after thinking they were RunDMC’s backing band in their version of “Walk This Way”. 🙂

During middle school, my best friend’s brother was a DJ.  DJ Ghost, of course.  Because every white DJ was called DJ Ghost in those days.  And he would slip us mix tapes of 2LiveCrew and Salt n’ Pepa, and all that other mid-80’s stuff.

I’ve had an on again-off again relationship with the music over the years.  And today I’m pretty picky about who I listen to.  I tend towards more “conscious” stuff that isn’t on the radio radar.  Lyrics Born, Chali2na, and their ilk.

The reason I bring this up is that my girlfriend and I saw the Kings of the Mic tour a couple nights ago, which features LLCoolJ, Ice Cube, Public Enemy, and De La Soul.  I LOVE Public Enemy, am familiar with LL’s popular work, know next to nothing about Ice Cube’s music (I skipped over gangsta rap), and pretty much only remember “Me, Myself, and I” from De La Soul.  And they, unfortunately, got cut off early before they could get to their big hit because the show started a little late.  Even LL, at the end of the night, ran up against Shoreline’s hard curfew rule and didn’t get to play “Goin’ Back To Cali”.

Anyway, there are a few things that I noticed about hip hop as someone whose been in and out of the scene over the years.

Now, I think it’s great that LL was able to put this package together and pack the joint with it.  That’s 22,000+ people.  Good payday for all those guys, I hope.  The problem is, it’s tough to pull off a hip hop show on a limited production budget (which they were obviously working with) and have it really hold a crowd.

They can’t have all the dancers and pyro that a pop show would have without putting their credibility at risk.  But two or three dudes pacing the stage just isn’t that engaging to watch.  This article really sums up a lot of the reasons these shows don’t work well as entertainment.

Conversely, small venue hip-hop is fantastic.  About two years ago I saw Public Enemy at Mezzanine in San Francisco (cap. 600 or so) and it was stunningly good.  It helps that they use a live band and there’s plenty of action on stage along with a well constructed show that has variety.  But even the average Wednesday night cypher with talented MCs can beat out the biggest names trying to pull off the same energy for 22,000 people.  You can’t match small room energy. (The same happens with comedy shows, coincidentally.)

It’s All About The Hits

It used to be in hip-hop that everything was about new music.  Show us some new tricks.  We don’t want to hear that old crap from last year.  That’s all changed now that hip-hop has grown up and become the cultural icon it has.

But at this show everyone just wanted to hear the old hits.  Admittedly, this was an old school targeted show.  But at one point all these guys would have been expected to present something new.  This was an audience that yelled for the old songs.

There’s good and bad about this.  Hip hop careers used to be short and once you were out, you were out.  So the earlier guys went through a few years of not getting enough respect because they couldn’t keep up with the younger artists as the style evolved.  So it’s great now that these groups can still go out and make a living.

But then, just like rock music, when everyone just wants to hear the hits, it’s hard for the style to evolve and it simply starts repeating itself trying to give everyone what they want.  So if Jason Aldean didn’t kill hip hop by rapping in a country song, it’s the scene’s own “old-school-ism” that will.

Live Hip Hop Has A Different Function Than On Record

It struck me about 30 minutes into the show that nearly all the lyrics were completely unintelligible.  Both due to being overwhelmed by bass and the incessant cupping of the mic these guy still insist on doing that destroys clarity.

For an art form that is 75% reliant on lyrics, that’s really damaging.  Even on songs I knew I could barely make out what was going on.  But I realized that rap music live serves the same function as it does in a club.  It’s the hypnosis of the beat and they rhythm of MC’s flow.  It’s a sound bed for dancing and trying to get laid.

Whereas on record, it’s all about the lyrics.  Yeah, you’re going to boom the bass, but fans know and care about all the words.  It’s an art form completely built on words.  Once I kind of changed my mindset, I enjoyed the show more.  It was about feeling the beat and letting it carry you away.  If I wanted to hear the words, I’d have to wait til later.