Since Disney’s been so into backstories lately, I thought it might be fun to speculate on the possible backgrounds of other Disney villains.  I’d really love to have a go at Captain Hook’s story, but they did his origin in one of the Tinkerbell movies in 2014. In that context, I can almost guarantee mine would be better.  But I’ll refrain for now. The Beagle Boys – The nemeses of wealthy tycoon Scrooge McDuck are often led by their mother, Ma Beagle.  It’s quite obvious that they were taught the joys of crime at an early age when Ma Beagle, during the Great Depression, was able to get extra soup by changing her mask each time she got in the soup line.  Their first attempt to rob a bank under their mother’s tutelage in 1935 resulted in a haul of $14.73.  It was the Depression after all.  This was a time before Child Protective Services.

Wicked Queen from Snow White – As a tween, the queen-to-be had super bad acne.  The kind of acne that makes you think of strawberry oatmeal. Constantly facing down the magazine covers of ladies in tight corsets with alabaster skin, she felt like a troll. A rejection by the big burly ladies man that apparently lives in every fairy tale town, led her into a period of cutting herself and listening to Bauhaus.

One day she acquired the magic mirror who gave her tips on facial washes and proper moisturizing.  Originally, his every day line wasn’t “You are the fairest of them all.”  Instead it was “Stop picking at it! You’ll just make it worse! Now go wash your face!”  Eventually her skin cleared up, she married a king, and gained a step daughter whose face made her remember all the hot girls that used to make popping sounds every time she walked by. 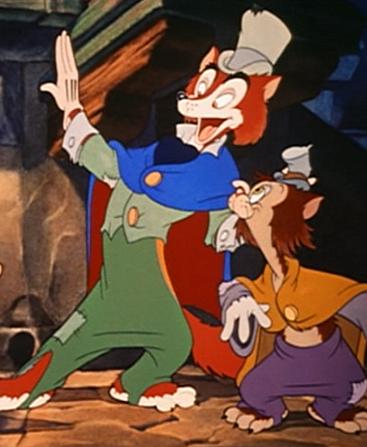 Honest John from Pinnochio – John Worthington Foulfellow dropped out of school in the 1st grade after his wealthy father disowned him for his lack of negotiating skills during a baseball card trade with another child. Despite being completely illiterate he worked his way up the con man ladder by learning how to swindle people out of popular toys they’d bought during the Christmas season, and reselling them at colossal markups on Ebay.  Though he never could get a handle on baseball card trades.  His partner Gideon was originally one of his marks.  When Honest John said, “Ok, follow me and we’ll get your money,” they just kept walking.  Gideon followed him around for 20 years, never receiving his money.

Cruella de Vil – Cruella is a classic example of a fur fetishist.  Her first sexual experience (creepy, I know) was on a fur comforter on her boyfriend Wayne’s 1970’s water bed. Things went well until the guy made a move she didn’t like and she poked him in the eye with one of her cheekbones.  They split up soon after and Cruella embraced the fur experience, often attending furry conventions dressed as a (totally against type) puppy.  Wayne remains blind in his right eye to this day.

Ursula the Sea Witch – Ursula is a Cecaelia, a creature that is half human and half octopus.  However she only has six tentacles rather than eight, making her half squid instead.  You can imagine how the other Cecaelia in her youth made fun of her missing two limbs.  It’s way less PC under the sea.  They would call her things like “Ursula the Three Person Sack Race” or “Crabby”.  Though the second name was more for her disposition than her number of limbs.  Like many picked-on girls, this led her to an eating disorder and an attraction to dark magic.  Her hairstyle gives her away as a fan of The Cure.  As much as she tried, she was never able to use her magic to grow two more tentacles.  And one day in a fit of fury vowed to screw with all hot girls who also had limb issues.

Gaston – Gaston is that douche.  Was a boy douche.  Grew into a man douche.  Most likely talks about his dick a lot more than people are comfortable with.  Douches have nothing of interest in their background.

Got a villain origin story you’d like to make up and share? Put it in the comments below.

Click play below to listen to my song “Happiest Place On Earth”.