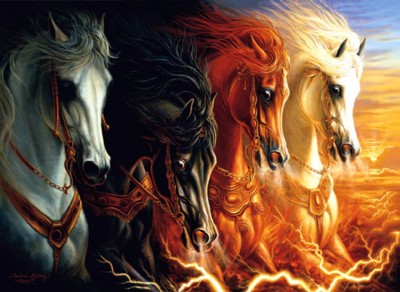 I just remembered that the apocalypse is coming this year.  I had to look up the date because I couldn’t remember when it was.  12/21/12.  How coincidentally symmetrical.  I guess I should set a reminder on my phone.  Wouldn’t want to be caught unawares when the day comes.  What I mean by that is I’m going to sleep in that day.  No use getting up early and working if the world’s just going to end.

Do we know what time yet?  I mean if it’s a late afternoon appointment I want to plan for a big lunch.  I’m talking buffet big, and hit the dessert table first.  Because what the hell, right?  If it’s a morning thing though, I want to eat big the night before so I don’t have to mess up sleeping in.

In case you’re wondering, I have no plans on surviving the apocalypse.  Who’d want to?  Have you ever seen the wardrobe in those post-apocalyptic movies?  All spikes and leather and animal skins and weird haircuts.  Apparently barbers are all evil and none of them make it through.  If the apocalypse is just going to look like a terrible 80’s music video, count me out.  Been there, done that.  I don’t know why post-apocalyptic fashion is so informed by S&M.

I’m guessing S&M becomes less of a pastime in the post-world.  No need to have someone beat you for fun when you’re just trying find something to eat without first being eaten by a 3-headed carnivorous cow.

Nobody except that guy from Man Vs Wild will really enjoy life anyway.  You think your cell phone service sucks now?  AT&T tech support will only be marginally less effective when they’re all obliterated.  Even if you’re the type that loves hunting and camping, you probably don’t want to do it every day while running from radioactive gorillas.

Do we even know HOW the world is going to end?  Giant asteroid? Earthquakes?  Massive Nuclear Accident?  I can only assume that it will somehow take the form of a Tyler Perry “Madea” movie.  In fact it could be Tyler Perry that brings the whole works down.  “Madea Blows Up The World” will be released on 12/11/12 and … there it is.  The real tragedy is that we’ll all be forced to watch it before being killed.

The face of the Apocalypse? I think yes.

Ah, I just discovered the time.  11:11 GMT.   I’m assuming that’s on military time.  So, AM.  That means 3:11am here on the west coast.  Ok, definitely buffet the night before.  Actually, the night before I’m performing at a Mexican restaurant in Novato, CA.  So I guess it’ll be a lot of Mexican food.

Or is it going to be time delayed like a New Years Eve telecast?  Dick Clark can host and we can watch the destruction unfold in each time zone.  I’ll bring the party hats.  And yes, of course Dick Clark will come back from the dead to host the Apocalypse.  Because, I swear, if we’re stuck with Ryan Seacrest… Hang on… That’s it.  It’s Ryan Seacrest.  AND Tyler Perry.  The two horsemen of the Apocalypse.  It will be Seacrest narrating a Madea movie.   The world may not end, but many people will take their own lives rather than be subjected to such a horror.

By the way, if you want some good fun reading on the Big A, check out www.december212012.com.  Seriously.  It’s funnier than anything I could ever write.  They even have a list of celebrities that believe in the Apocalypse, include Montel Williams, Jeanine Garofalo, Woody Harrelson, and Britney Spears.  Well, I know when I’m looking for advice about the future and what it holds, those would be the first people I’d ask.  Hey, if the Big A is going to take that crew off our hands, maybe the world really will be a better place.

I’m not sure why anyone would want to survive anyway.  The only thing I can figure is that these people are hoping to be the last man/woman/thing on Earth so they have a chance of getting laid.  And if that’s who’s going to repopulate the planet, I don’t want to be there to see it.

So here’s my plan for the Apocalypse: Sleep, eat, die.  If we’re all going, let’s all go.  It’s more likely though that I’ll wake up on the 22nd with a severe stomach ache and a to-do list that remains full intact.