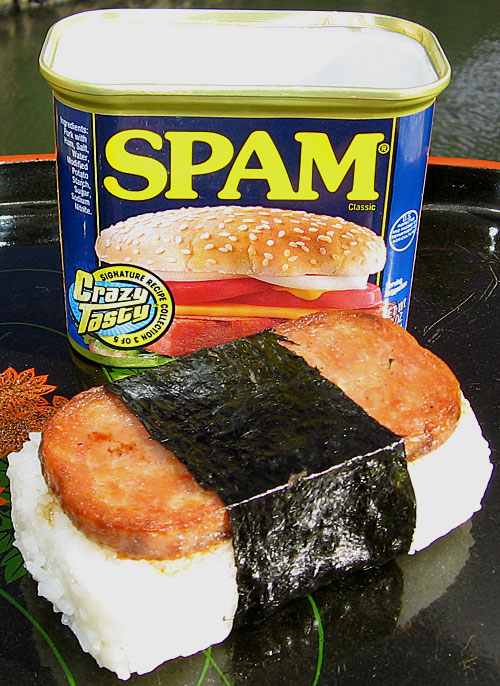 I recently got back from my first trip to Hawaii.  My girlfriend and love to eat on any trip, though we’re not really foodies.  We’re too cheap to be real foodies.  But we do enjoy checking out the local cuisine.

She asked her more Hawaii-experienced friends what we should eat while there.  They said, “Ooh, they have macaroni salad and white rice and Spam!”

Really?  The best of Hawaiian cuisine resembles a 3rd grade potluck in Alabama?  Was there a Redneck Invasion sometime in Hawaii’s history?  Was Hawaii once a colony of Tennessee?

In a meat processing plant, there’s a guy that goes around at the end of the day and sweeps up the floor.  Then he puts it in a press-y thing and that’s Spam.  Leftover meat parts and probably bits of toilet paper.

My girl tried a thing called a Spam musubi.  It’s white rice, a slab of Spam, and wrapped in a seaweed leaf.  It’s like redneck sushi.  It makes me think of a Japanese guy with a confederate flag on his car.

And it was just as tasty as it sounds…

I know it’s a leftover influence from the military presences during WWII.  But here on the mainland we’ve been able to rid ourselves of lots of bad things, like polio and tuberculosis.  We’re still working on a vaccine to try and rid ourselves of Michael Bay.  But you’d think Hawaii could get it together to shun Spam a little.

I did try poi.  It’s a very traditional Hawaiian dish that consists of mashed up taro root and…. yeah, that’s it.  It kind of has the consistency of paste and the flavor of… paste.  5 year olds all around me were asking their parents why they paid for this trip when they could have eaten paste at home.

Our bus driver said people will often flavor their poi with sugar or Sriracha sauce.  If that’s the case, you my as well just eat the flavored paste.

I will give them this… The Hawaiians know how to do pork.  That whole put it in the ground for 8 hours thing… Delicious.

Everyone told us to try shave ice there too.  They were raving about it.  It’s a sno-cone.  Like you get at a carnival.  We tried a mango one.  If your culture’s best cuisine could be mistake for yellow snow, maybe it’s time to work a little harder at it.

That didn’t stop me from having 5 or 6 more during the trip though.

Next trip, we need to really pick a place with something to serve.  Our last trip off the mainland was to Scotland.  There’s a reason they’re known for their whiskey.