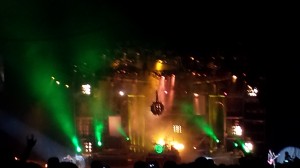 Somewhere waaaaaay down there is Motley Crue.

I went to see Motley Crue and Alice Cooper the other night.  That was the music of my teenage years and you get stuck with that through your whole life.  It’s why my parents still listen to Roy Orbison, 90’s kids will always listen to Nirvana and Tupac, and some poor child today is going to be stuck with Iggy Azalea for the rest of their lives.

Strangely, this was my first time seeing Motley Crue. I somehow missed them back in the heyday. But when Groupon offered $10 lawn seats, I couldn’t resist.  Alice Cooper is like a good Broadway show.  You know that chandelier is coming down in Phantom of the Opera and you know the guillotine is coming out to take Alice’s head off for the billionth time. But it’s still super fun to watch.

There is, of course, plenty to hate about Motley Crue…

Especially to anyone outside that time frame and particular subculture.  The sexism, the inane lyrics, Vince Neil’s voice (then and especially now…).

But the music you’re mentally linked with for a lifetime does that for a reason.  For me and Motley Crue, it was one song on one album, and here’s why.

My previous musical experience had mostly been pop radio. Plenty of Phil Collins and Sade on KWSS, our local station. The soundtracks for “Top Gun” and “Footloose” got a ton of play at our house. Yes, “Danger Zone” by Kenny Loggins was “heavy” music to me at the time.  Which, incidentally, was why I was so excited to get an email from Kenny Loggins years later.

In 1986 I’d discovered another much-maligned band… Poison.  If you every wondered where the cartoonishness of my work now comes from, it’s probably all starting to make sense now.  “Talk Dirty To Me” was getting some radio play and I went and made my first album purchase ever.  Their first record, Look What The Cat Dragged In.  My dad saw the cover and asked if they were women.

That album, to my ears, wasn’t really that far away from “Danger Zone”. A bit edgier, but still pretty good natured.  My next album purchase a year later (geez… remember when that was a thing?) changed the game entirely.

Let me back up…

When I was a kid, there was a girl that lived down the street from me.  Maybe 5 years older than me. Tall.  Mohawk.  Leather jacket.  Band patches.  Always in trouble. And fascinating.  On our little suburban block she stuck out like a clown in the middle of a gang fight.

Now you just go to Spotify and look it up and pass immediate judgment after listening for 30 seconds. But back then it was waiting for a record store gift certificate for a birthday or Christmas, convincing the parents to drive you over there, and then hoping they didn’t veto whatever the buying decision was.

In 1987, I took my Wherehouse gift certificate over to our local location and browsed the bins of vinyl. This is vinyl when it was normal and not just for hipsters.  In the back of my head somewhere, that girl’s jacket patches were rolling around and when I saw Motley Crue’s latest opus “Girls Girls Girls”, I grabbed it and headed for the check stand. After clearing it with Dad first.  Who had some questions. What kind of music do they play? “I have no idea.” Why do you want it? “I have no idea.”  Are you sure that’s what you want? “Yes, absolutely.”

The album cover alone was that window I’d been wanting to peek into. Big hair, motorcycles, all in this dimly lit alleyway. Light years away from Kenny Loggins.

I took it home, ripped off the shrink wrap and popped into the stereo that I’d won selling magazines for school the year before.  And while the title track wraps up plenty of that teenage hormonal rush in a neat little package, it was the very first song on the album that got me.  Wild Side.

Looking back of course, the song is as cartoonish as any other hair metal. (Not to mention, pretty much just a rewrite of “Shout at the Devil”.) Full of pat phrases about the dark side of Hollywood life and that pervasive 1980’s greed.

But to a 14 year old who had previously thought Phil Collins’ “In The Air Tonight” was dark, this… this whatever this was…. was DANGEROUS.  I felt physically uncomfortable listening to it.  The religious references, the heavy swagger, the guitars… It made my heart pound and my stomach felt queasy. It was a world I’d never been a part of. Not just Hollywood, but the dangerous parts of Hollywood.  It was terrifying.

Put yourself in the mind of a mid 1980’s suburban 14 year old and give the song a listen.

I kept listening for the same reason one watches horror movies.  You like the rush of being scared.  Eventually that rush wears off and you can laugh at those same horror movies.  (Except The Shining.  That thing scares the crap out of me every time…)  And that happens with music too.

I went on to buy the rest of the bands on that girls jacket.  Metallica (hated them at first, but now one of the greatest bands ever.)  Krokus (oh my god… what a disappointment.)  Judas Priest, Death Angel, Testament, Exodus, Faster Pussycat, Bang Tango… I listened to every good and god awful hard rock and metal band I could get my hands on.

And eventually you move on to other things too. College showed me the wonders of blues, jazz, and Latin music. But that old stuff is still in the back of your mind.  When Brand May and I started Roadside Attraction many years ago, he was a giant Nikki Sixx fan and that sound became part of the basis of our sound when we started.

I hadn’t listened to the “Girls” album in years before the concert the other night. I don’t even think I ever bought any of their albums on CD.  They opened with “Saints of Los Angeles” of their recent album. And then the second song was “Wild Side”.  And it was like running into an ex girlfriend. That girl who had been a little out of your league and really made you work to keep up with her.  Just that little bit of danger seeped back into my brain.  And for just a few minutes you lose some of the world weariness, the “meh” of daily life… and remember the first time that music scared the crap out of you.