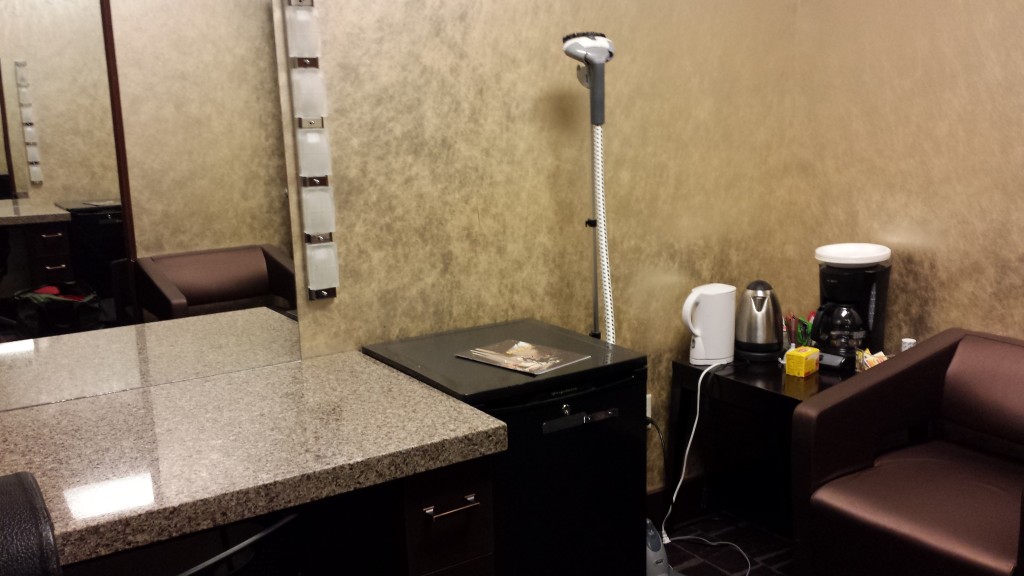 Now this was an interesting gig… That picture at the left is what a real dressing room looks like.  Not a bathroom stall like I’m usually dressing in.

This is the dressing room at the Full Moon Bar (which more like a theater) at the Diamond Jo Casino in Dubuque, IA.  And you can see that real dressing rooms are way less interesting than you might think.  And I believe that’s on purpose.  Before and after shows, most performers (including me) want calm and quiet.  This is the place where we warm up and cool down.

I like Dubuque.  It’s a city that feels like it has history that it appreciates without it becoming overbearing.  You’re right on the Mississippi River and they’ve got some cool walking trails, ship tours, and museums.  And for this gig, they put us up at the Hotel Julien which is one of those classy old old hotels that make me think of “The Shining”.

I think my only complaint about Dubuque is that I had trouble finding good food there.  Except for the awesome sandwich I had at the casino deli after the show. 🙂

On this show I was featuring for Dave Coulier, who you might remember as Joey from Full House.  You’ll be pleased to know that he’s a super nice guy.  I can always tell when someone like that introduces themselves first.  He came in and said, “Hi, I’m Dave.”  That little act tells you that they don’t assume their fame.  Very cool.

Dave scraped in just before show time due to a longer-than-he-thought drive from the airport in Des Moines.  But we had about 20 minutes to hang out backstage and chat.

Here’s the stage at the venue. It was lit much nicer for the show, of course.

Have to admit I was a little worried about this show.  Last time I did this venue I had a pretty terrible set, but then sold almost every piece of merchandise I had on the table. So that was confusing.  To top it this time, I knew I needed to work clean since Dave works clean.  He told me to do whatever I wanted, but my contract said PG-13 too.

I’m not a super dirty comic by any means. But I can definitely weird people if I’m not careful.  So I did 30 minutes of my cleanest stuff, including a super abbreviated version of “Truck Nuts”.  At the end of the show I did my new song “Look Here”, “Five and Below”, and “Buy My Stuff“… Yep, stuff.

The show itself went much better than last time.  I’d give it a 75% or so.  Dave was very funny and the crowd loved him of course.  He wasn’t selling merch, so I got to grab the crowd on that.  Strangely, with a better set, I only sold about half as much stuff as last time.  Ya just never know.

Signed lots of autographs, took lots of pictures, and saw a lot of nice mentions online after the show.  So overall, I was pretty happy with this one.  Dave, tired as he was from traveling, spent a good hour talking to fans after the show, then spent at least another hour at the bar talking with people.  And that’s why he’ll continue to draw for years.