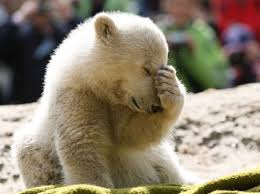 See? Even bears can’t believe we do this crap.

I have to admit, I’m feeling a little disenchanted with the human race today.  Some days the pettiness and stupidity get to you.

To let’s go with that vibe and laugh at the stupid people, shall we?  Here’s 5 things that will dissuade you from thinking humans are the highest form of life.

1. People who taser themselves.  Yes, people take stun guns and use them on themselves.  And video it. Yes indeed.  “Do it again Roger.”

2. Sweating the details.  There’s a lovely little site called FMyLife.com in which people complain about the random petty inconveniences of their daily lives.  Here’s one from today.

“Today, I baked strawberry muffins for my family, putting half a strawberry on each of them. Only when it was too late did I realize that they looked like extremely creepy breasts. FML”

Wow! Stop the presses! Let’s get you some governmental aid of some sort to help you deal with this tragedy!  Now, give me the recipe for creepy breast muffins so I can make and serve them to inappropriate people.

3.Self Segregation.  After constantly going on about how everyone needs to get along, the world is one people, etc and blah… people will immediately segregate themselves into smaller and smaller groups.  I assume until they are the only person left in the group, at which time happiness ensues. Apparently geeks, nerds, dorks, and dweebs are totally different. The rest of the world can’t tell.

4. Spending ridiculous amounts of money on brand names.  This Louis Vuitton handbag below retails for $2990 and will never ever hold anything inside it nearly that valuable.  It’s like buying a bank quality vault to hold your collection of Taco Bell sauce packets.

Bonus! You can RENT this bag for just $350 per month from a site that specializes in renting purses! Who needs groceries anyway?

5. Being such a diehard fan of a sports team that their loss ruins your day/week/year.  I’m willing to bet that, if asked, those overpaid jocks you’ve devoted your life to don’t give a damn about your sudden depression because they missed that last field goal just before the clock ran out.  The people closest to you however, would be thrilled if you’d just get over it.

My mistake… This guy doesn’t have anyone he’s close to. Except the voices in his head.